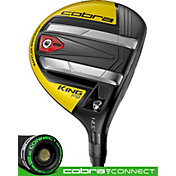 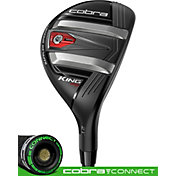 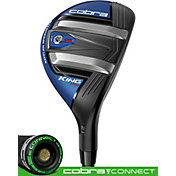 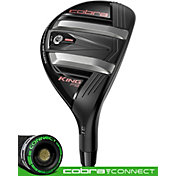 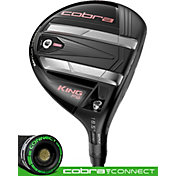 When setting out to design the new F9 driver, Cobra's engineers had a clear objective in mind: create a highly aerodynamic driver head without sacrificing a low center of gravity. The result is Speedback Technology — the revolutionary force behind Cobra's fastest and longest driver ever.

Other key features in the Cobra King F9 driver include:

Watch the video to see the new Cobra King F9 in action:

The F9 is Cobra's first-ever fairway to feature a CNC-milled face, forged and precision-milled from 455 stainless steel to provide unprecedented ball speed. New Speedback Technology lowers the center of gravity by 10% to improve speed, stability and launch, while Cobra's patented Baffler rails on the sole help the club glide through the turf even on the toughest lies.

Skilled players may prefer the compact shape of the F9 Speedback Tour Fairway, the next evolution of the F8+ fairway.

Both models also include the following features:

The new F9 hybrid is designed to maximize speed and launch from any lie. Speedback Technology combines with re-engineered Baffler rails to produce improved turf interaction with a lower center of gravity. The clubhead on the F9 hybrid is 10% larger than the F8, increasing the Moment of Inertia (MOI) and forgiveness. A lower toe provides a square leading edge to aid with alignment.

Cobra King F9 Speedback hybrids are also available with one-length shafts designed to match the length of a 7-iron.

Other F9 hybrid features include:

With the F9, Cobra aims to give golfers what they need most in an iron: power, stability and accuracy. A low, deep center of gravity maximizes ball speed, launch and carry, while Speedback shaping raises weight from the sole to the hitting area to maintain a thin sole width. In the 4-7 irons, a combined 33 grams of tungsten is added to the heel and toe to increase MOI by 10%.

These new Cobra irons will also be available with one-length shafts that match the 7-iron length.